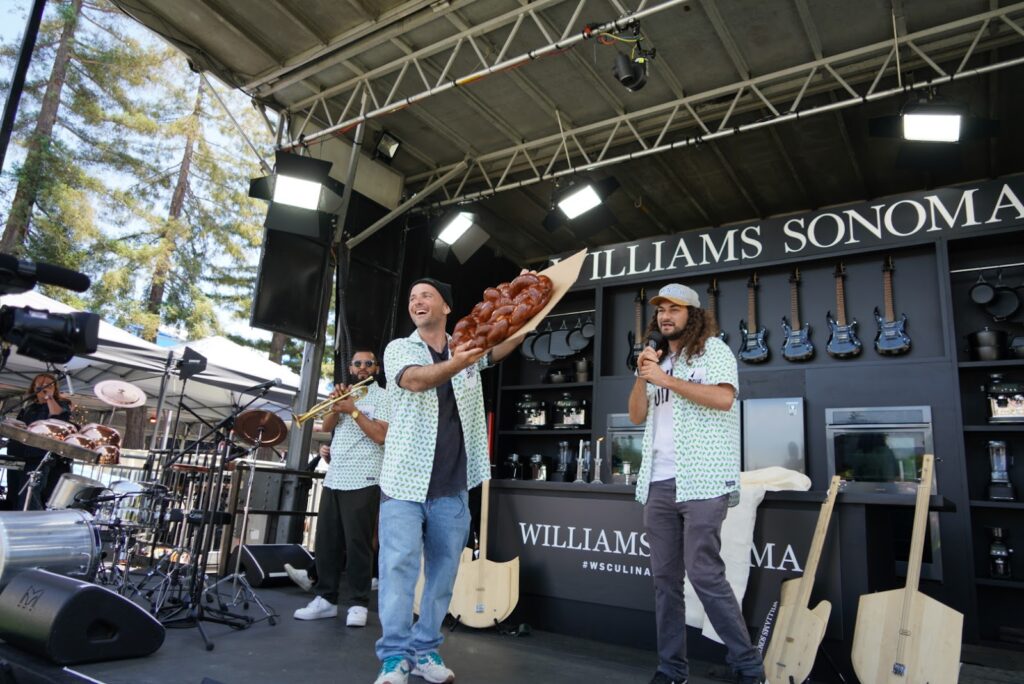 A cultural experience with:

SHABBOTTLEROCK was the opener on the Williams Sonoma Culinary Stage Friday at BottleRock Napa Valley. A surprise addition to kick off the stage did not disappoint, as festival goers filled the popular Culinary Garden. As the beat from Notorious B.I.G’s hit song Big Poppa blared over the loudspeakers, Brooklyn based Rapper Kosha Dillz rapped freestyle and replaced the famous chorus with “I love it when you eat my challah.”

SHABBOTTLEROCK was conceived and performed by Dillz and Adam Swig, Founder and Executive Director of non-profit organization Value Culture. “BottleRock is Shabbat,” Swig explained to the crowd, “It’s all about Shabbat energy, relaxing into your weekend with food, wine and community.”

Dillz and Swig lit Shabbat Candles and recited the blessing, as well as the two other traditional reform prayers for Shabbat. “I’m going to bless all the wine at BottleRock right now, even the whines coming from the food lines.” exclaimed Swig before they did the prayer for the wine. Ater the kiddush prayer was read, Dillz and Swig, asked for a call and response, “L’Chaim Time!” and festival goers raised their glasses.

A trumpet player from Kosha Dillz came on stage for the big reveal of a giant challah baked by Frena Bakery of San Francisco with a breading inscription of “BottleRock 2022.” Dillz and Swig had the crowd join them (those that knew it) in the Hamotzi, the blessing for the bread. 18 small challahs baked by Grand Bakery in Oakland were thrown like footballs into the crowd for spectators to share and enjoy, and the big challah was ripped and shared by Dillz, Swig, and friends on stage.

“I was walking by the Culinary garden and all of the sudden I heard Hebrew prayers and see challahs flying through the air!” said Laura from Redwood City, “It was great! My grandmother would have been proud I was at a Shabbat at BottleRock!”

“I love challah,” said Jeffrey Levine of San Francisco, “This challah is good.”

SHABBOTTLEROCK concluded with Dillz performing his song Schmoozin’. He got the crowd involved in the chorus, with everyone shouting ‘Jewish!’

“That was a lot of fun, I’d never been to a Shabbat, and now I want to know more.” said Wes Bode from Pacifica.

Dillz and Swig met in 2013 at a Matisyahu and Rebelution concert in Berkeley, Californina becoming fast friends. Dillz was performing on stage with Matisyahu. After the performance Dillz greeted the crowd passing out stickers and merchandise. Swig said to Dillz, “I need a rapper for an event.” Almost 10 years later the pair are frequent collaborators and have made history creating many unique experiences from reimagining Jewish tradition for new generations, cross cultural community building, and innovating Holocaust education.

Kosha Dilllz and Value Culture hope to bring their Shabbat experiences to other festivals around the world. “SHABBOTTLEROCK was special because not only were we booked to perform at BottleRock, but we were able to bring our special sauce to the Culinary Stage and share what we do on Friday nights and Saturday afternoons with a diverse audience new to Shabbat.” Kosha Dillz was originally booked to do 2 performances at the festival, and organizer Tom Hoppa loved the SHABBOTTLEROCK idea.

“This is a great addition to a music festival,” said Danielle Madeira, founder of Madeira and Partners. “I hope to see it again here next year.”