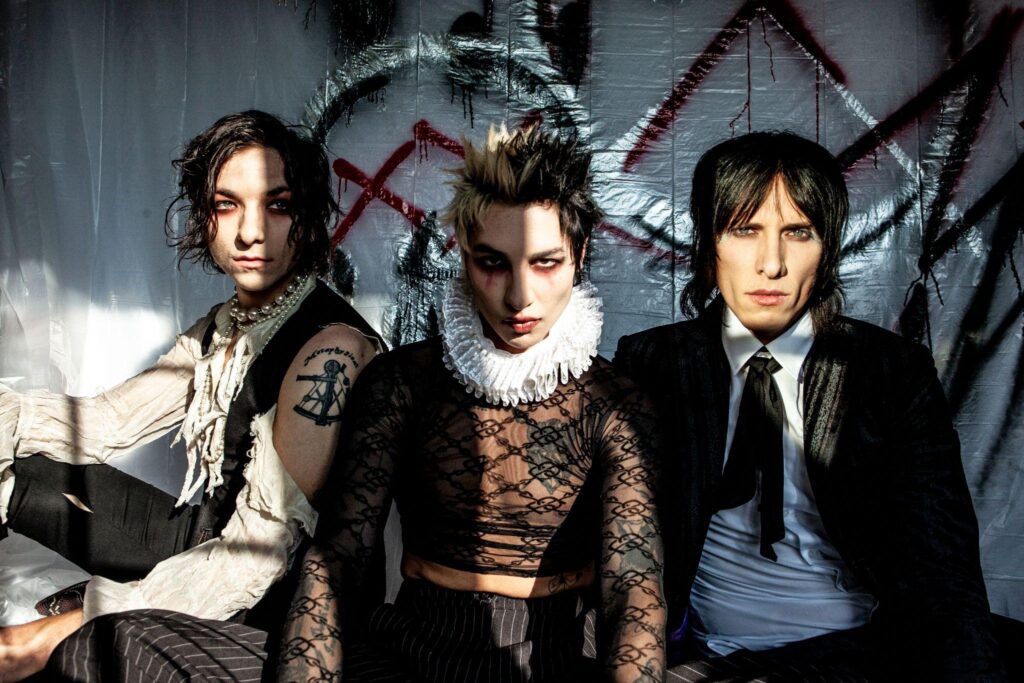 Art-rock trio Palaye Royale release their new song “Broken” today via Sumerian Records. Produced by Grammy-nominated Chris Greatti (who recently worked with Machine Gun Kelly and Yungblud), the song delves into the complexities of a doomed and toxic romance, oscillating between an explosive chorus and achingly vulnerable verses. The accompanying video, directed by Eva Dolezalova, was filmed in a 12th-century monastery in Prague.

“In moments of darkness, it is crucial to find the light and grow into something even more beautiful”, explains lead singer Remington Leith. “Being broken means you have the opportunity to piece yourself back into an even better version”.

The video brings this concept to life, with the visual symbolism of a burning rose representing the rejection of tainted love, followed by redemption, metamorphosis, and rebirth.

Palaye Royale is comprised of Las Vegas-bred brothers Remington Leith (vocals), Sebastian Danzig (guitar), and Emerson Barrett (drums). The release of “Broken” comes on the heels of their completely sold-out headline tour across Europe, which saw the band bring their rock-n-roll circus to some of their biggest headline shows to date, including an arena in the Czech Republic.

Equal parts brit-pop, glam rock, and art-punk, Palaye Royale has earned a legion of obsessive, cult-like fans with their fast-paced dirty rock n’ roll and unparalleled swagger, amassing over half a billion streams throughout their career. The trio brought the juxtaposition of the glitz and grime of their teenage years spent in Las Vegas before relocating to Los Angeles. They worked their way up through the ruthless L.A. rock scene while briefly living out of their car, thanks to their reckless live performances, lyrical vulnerability, and knack for non-normative self-expression. The band is readying “Fever Dream”, their fourth full-length studio album, and follow-up to 2020’s “The Bastards”.