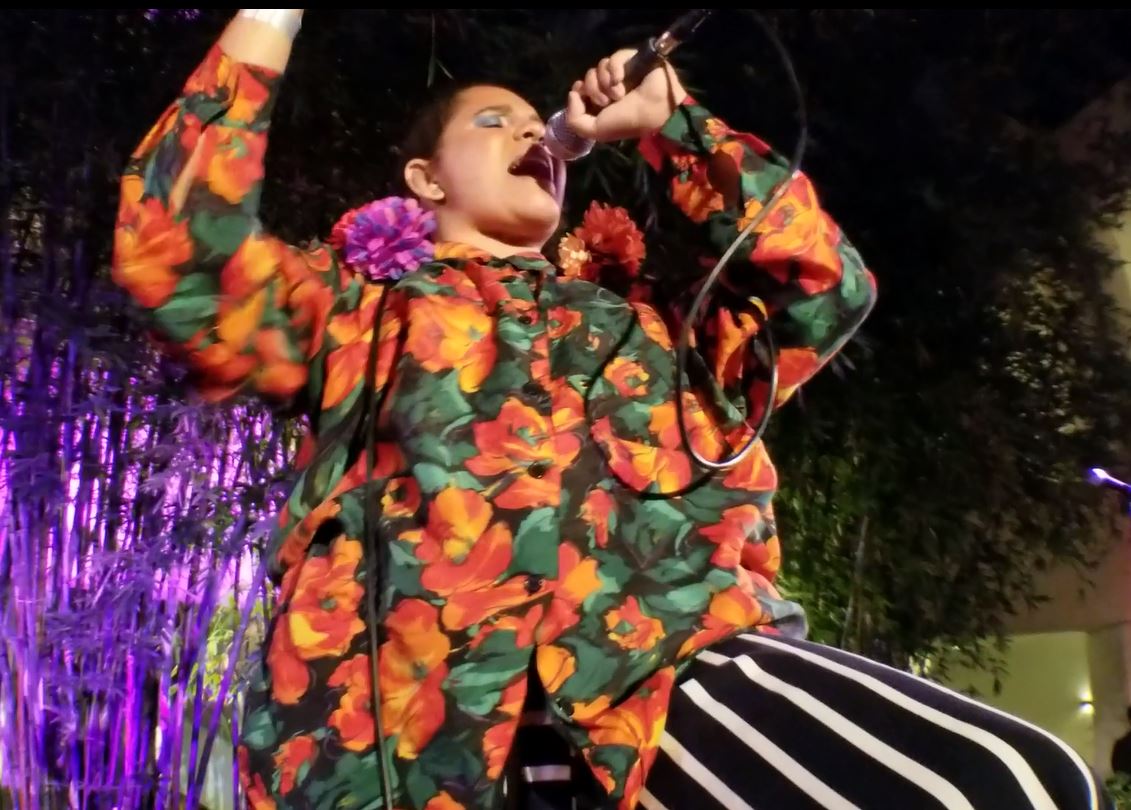 (Westwood, CA) The Hammer Museum in Westwood Friday night opened is Pacific Standard Time:LA/LA  art exhibition,  Radical Women: Latin American art, 1960 -1985, with Latinas Out Loud”: ¡Párriba!  a wild concert led by Lido Pimienta and introduced by LA’s own joyful punk, funk Latin rock band, Sister Mantos.  It was the perfect combination of musical and plastic arts to showcase the power of Latinas in our culture.

The Hammer Museum –“The Hammer” — is a blocky edifice that could be an office building.  Other than the word “Hammer” on the side in large letters it is pretty much like the office towers around it. Opened free to the public in 1990,  The Hammer was founded by Dr. Armand Hammer, the late Chairman of Occidental Petroleum Corporation, for  his collections of old masters plus traveling exhibitions. Four years later everything changed.  UCLA took over The Hammer’s management and operations and launched programs that encompassed the entire Los Angeles Community with film, theater, music and dance as well as static art. Latinas Out Loud is part of The Hammer’s involvement in the Pacific Standard Time: LA/LA art extravaganza and the museum’s programmers held nothing back.  The music and the art was loud and full of Latinas with attitude.

The Hammer is built around a spacious internal courtyard used for sculpture, playful art or just plain contemplation.  Friday night it was a venue. At one end was a full-scale stage and first class light and sound setup, a very hot DJ team, The Chulíta Vinyl Club,  and full light and sound boards and computers staffed by three people, augmented by another nine guys and gals working the stage.  Two massive bars had been set up with multiple bartenders shaking and serving like the pros they were. The back end of the courtyard led out to food trucks parked along the curb.  Plus, all the galleries upstairs and around the courtyard were open.

¡Párriba!  was a full concert, not an adjunct to the galleries. It kicked off with Sister Mantos, the wild LA-based psychedelic improvisational funk, punk  pop Latin dance band founded by performance artist Oscar Miguel Santos. The nine-piece band  belted out lyrics of female and queer empowerment in English and Spanish with beats that did exactly what the posters said –¡Pá rriba! – got us on our feet.  Song after song rolled off the stage with singling, clapping shouting and most of all, dancing, that turned the courtyard into a noisy writhing mass  that itself could have been a dynamic art installation.

It took a half hour to reset the stage for Lido Pimienta, but the Chulita Vinyl Club turntables kept rolling and the crowd kept dancing, even while they waited at the bars or the food trucks or wandered the art galleries.  It was a three-story party.  Young museum volunteers roamed the floor signing up new members and a museum information table was crowded with bowls of free buttons from bands and local organizations as well as music posters.

When the courtyard lights came down signaling the next act, the art lovers drifted out of the galleries to the catwalks over the courtyard and stage and the writing mass reassembled itself   from the bar and food trucks and tables to the dance floor in front of the stage. They knew what was coming.

What was coming was Lido Pimiento, a diminutive hurricane of music, anger, joy, humor, and audience love. Encased in a silver hoodie suit over black and white prison stripe wide pants, she strolled onto an empty stage  chanting in Spanish. She moved to front center stage where a voice-control pedal box  allowed her to distort, modulate and multiply her bell-clear voice.  Her band – a drummer, a synth controller and a female dancer, came out behind her and began building a wall of synth and percussion while the dancer undulated to Lido’s lyrics, alternating between Spanish and English, singing the praises of women.

What followed was part bilingual performance art, part rap, part opera, part synth-punk, part stand-up comedy, part political statement  (“you don’t understand Spanish and you live in Los Angeles? – get with the program!”). Lido moved constantly, backing up across the stage, sauntering over to the synth table and adjusting the controls, leaping, spinning and hopping. She moved to the edge of the stage and reached into an adoring audience, slapping hands and stopping for photos, then charging to the other side and putting her foot on a monitor in a classic rock pose.  At some point Lido shed the silver suit to reveal the striped pants, a brilliant flowered shirt, red track shoes and pigtails tied off of with huge flowers.  She was joined onstage by Francisca Valenzuela for a back and forth duet, the American-born Chilean singer, poet, and multi-instrumentalist and Latin Grammy nominated platinum recording star.

The beer, wine and tequila flowed. The lights flashed and strobed and most of downtown Westwood echoed with Latin rock, punk, funk., and people  looked at great art. ¡Pá rriba!